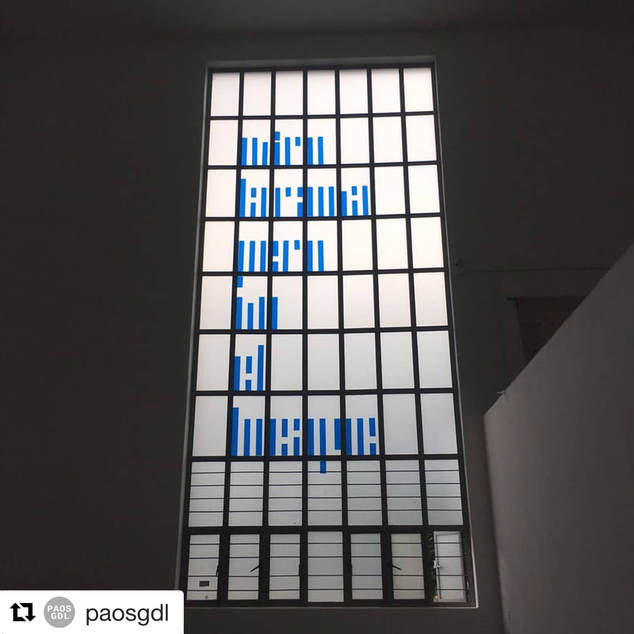 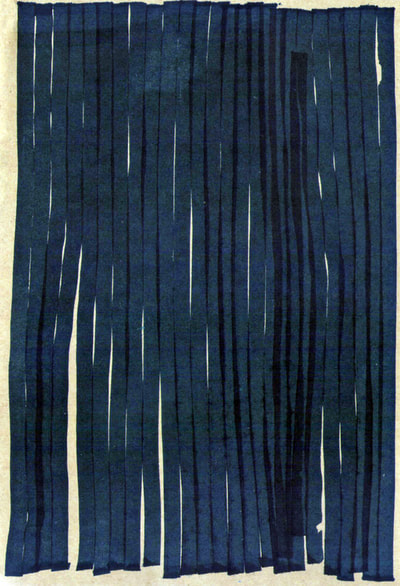 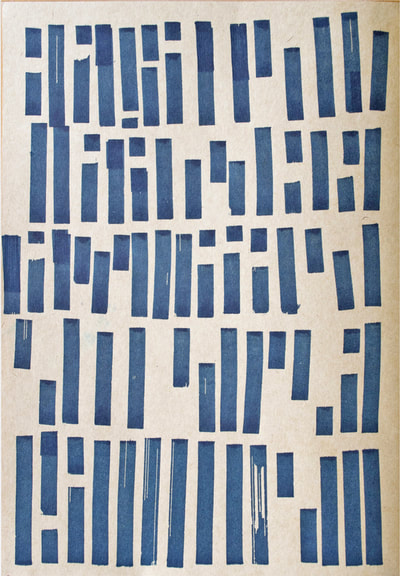 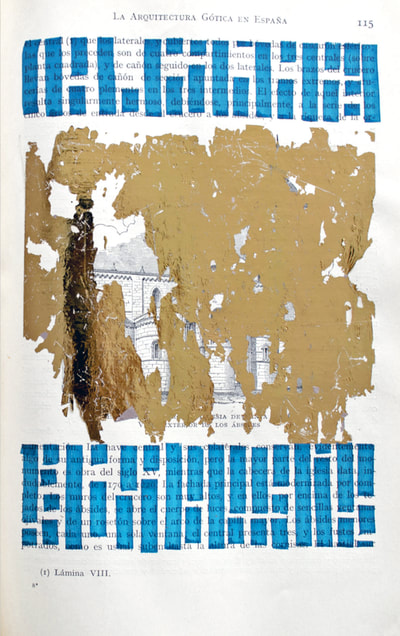 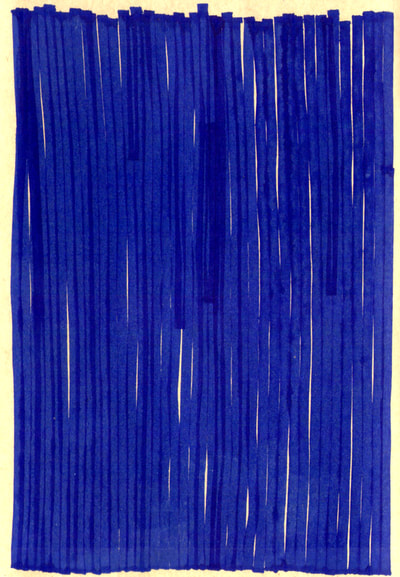 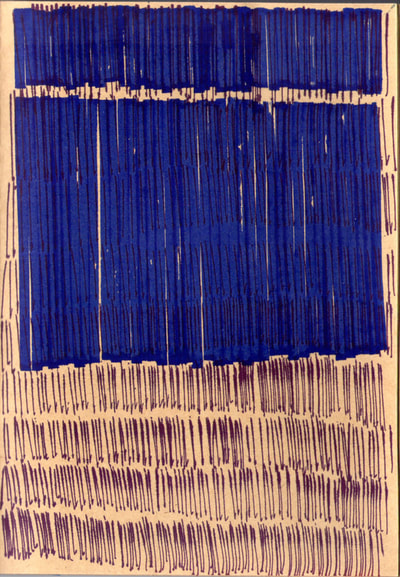 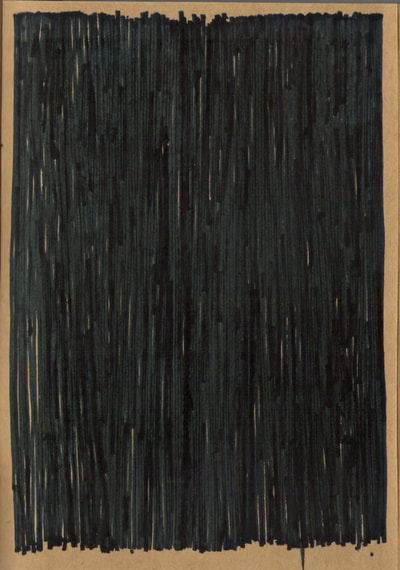 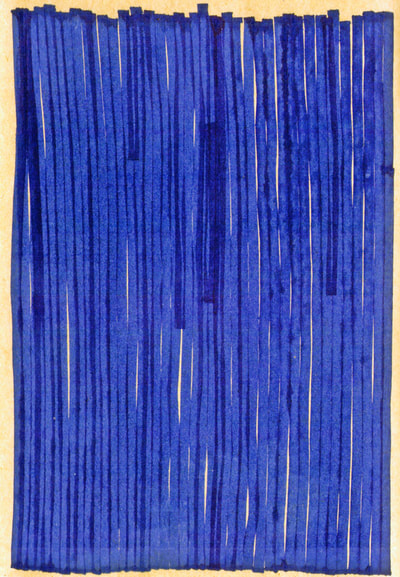 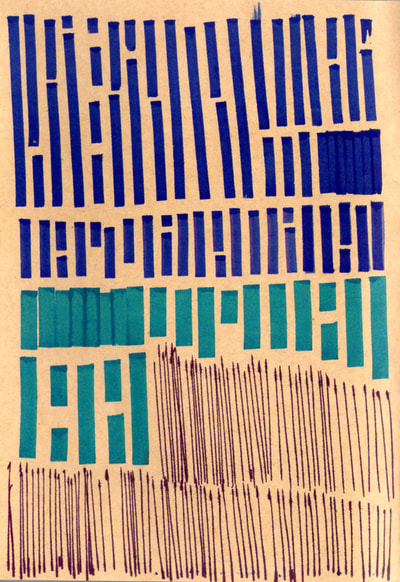 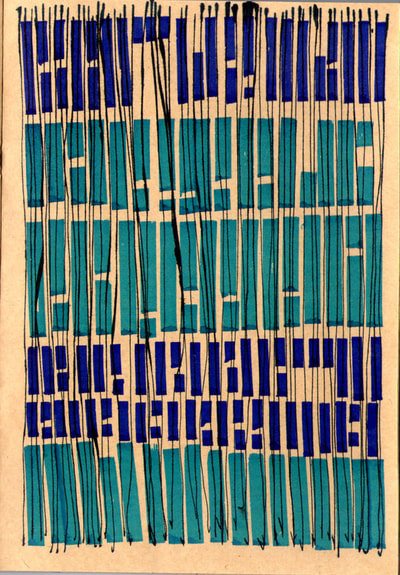 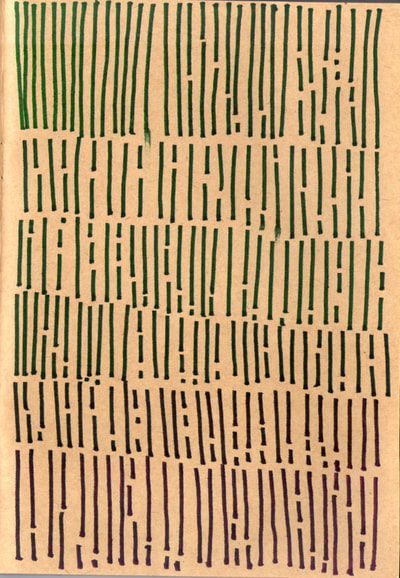 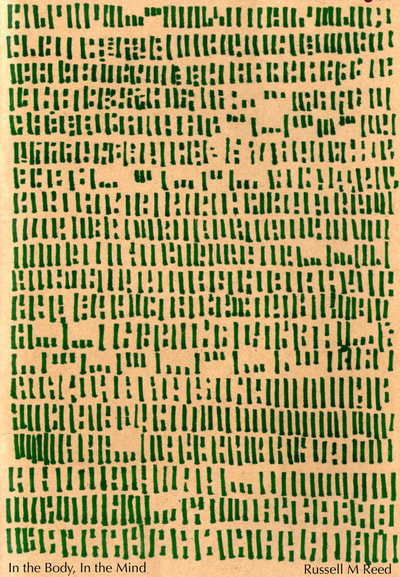 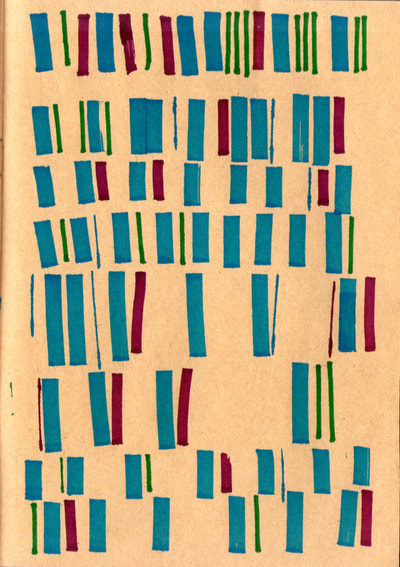 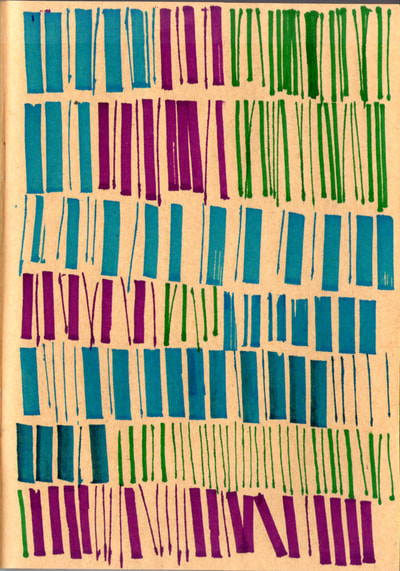 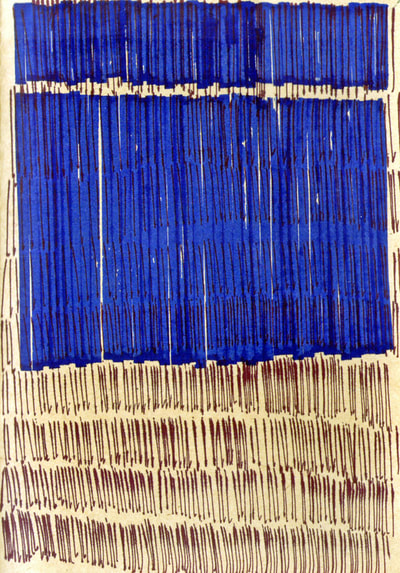 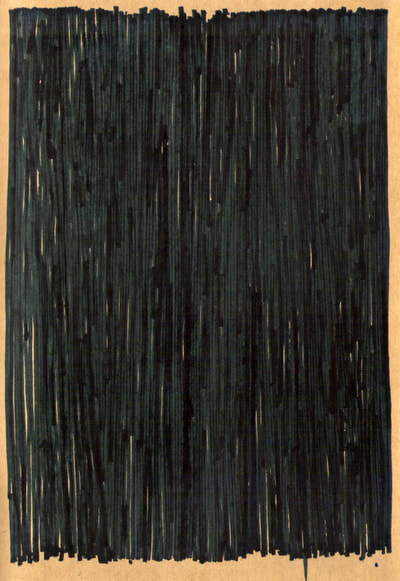 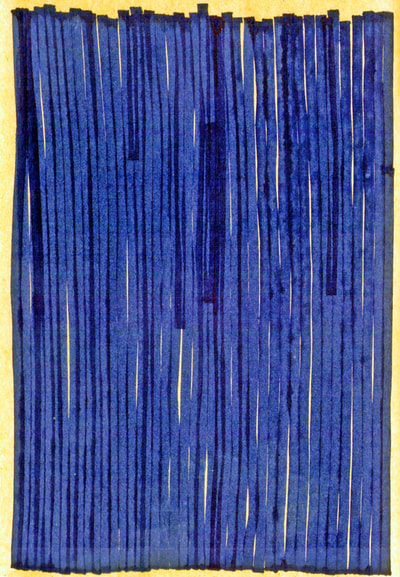 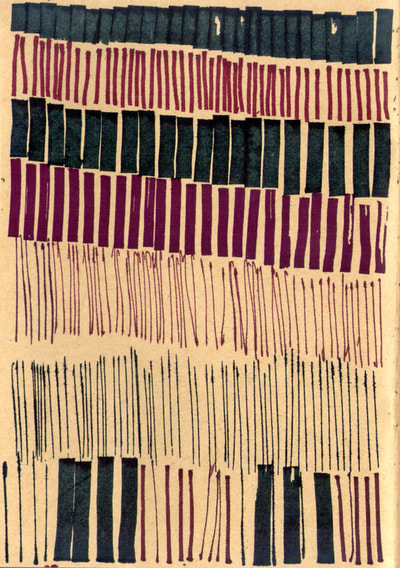 In the Body, In the Mind

Agradecemos el apoyo de PAOS Gdl.
In The Body, In the Mind

This large work is the first solo piano piece I’ve written in over twenty years. Many of my works have included piano, and I am pleased with the variety and originality of the writing, but solo works have until now caused me considerable grief and disappointment.
My problem was that for most of my life I have compartmentalized my work as a performer and my work as a composer. Perhaps it seems odd that the two should exist independently, and the truth is, of course, they really don’t and never have, but I have separated them, I think, due to the ways in which I view life and the experiences of life (The Sensations Of Existence). For me the piano has been a refuge of sensuality. A refuge of feeling in the body. An active engagement with the sensations, the motions, the mechanisms of the body. I think most pianists take refuge in the instrument. They find that it becomes a source of connection with history and the history of one’s own feelings, thoughts and memories. A feeling, a thought made real by touch--made alive through the body. For instance I often long to play the final cadence of the second piece from Kreisleriana. As I write this I can hear the music in my mind, but there is something more real, more luxurious about going to the piano and playing it. The playing of it brings the depth of it into the body, brings all of the memories of playing it, discovering it, back into existence. It’s like a seed forever germinating through the body. Not re-created–– CREATED. In that moment and in that air. Containing the past, but new––ALIVE.
For me the act of composition is something different. It is primarily a process of the mind, a matter of limitations, a figuring out of exclusions. It is a process that is the opposite of sensuality. I do not feel my compositions in my body, I experience them in my mind. And as I’ve carried on with composing, the process has become more painful––like a gnawing hunger. An urge to fix something that is not right, does not seem correct in some mysterious way. My inability to name the feeling exactly, to know the root of it, is part of its inextricability., I have tried many times in the past to write a big piece for piano, my piece, my beginning of a set of expressions and ideas laid out for the instrument, but I have always been thwarted or beaten by this duality that I have felt. My only option was to meet it head on; to deal with it as it exists. To turn what I have seen as a problem, a hinderance, into the essence of a work that is in fact, Me: a body full of symbols, a mind full of senses.

Asintota The idea for this work came from a collaboration with the artist Santino Escatel. We
were invited to create an installation for the OUTsider Festival in Austin, TX, and the work, Consideración de las Cosas Más Cercanas, uses as its central visual image a neon sculpture representing an asymptote, the metaphor being a futile struggle to become united with the object of one’s desire. I like the idea of arcs, curves swooping toward a fixed point or wrapping ever tighter around an infinite line. From this starting point I wrote what is basically an etude for piano. I’ll leave you to decipher the harmonic language, but do notice that after the double bar, the infinite point of relation becomes audible in the low left hand note.

por la tarde During the Summer of 2016 I spent a month in Guadalajara, a city I love and know
quite well. I fell into the habit of spending the afternoon in bed staring at the sky through a large picture window which offered a view obstructed only by traces of neighboring rooftops--a view rather like a Sol Le Wit. During these meditations I realized that the feeling in my body was similar to how time can move in music: For me music exists in multiple times and in infinite forms variously constructed and re-constructed in the mind of the listener, thinker. So that there is the score of the music, a concrete representation of the work and then there exists the “realness” of the music which exists in the time it is vibrating in the air and again when it is remembered in the mind. These various times and forms play with each other and are delightful realities of thought and construction. And in this space one can experience the process of knowing all of something and all of its parts in one entity or in limitless entities--multiplicity.    This piece, which is a barcarolle, is an effort to flirt with these ideas. Three distinct elements are at play, loose, without bones, vibrating.
﻿
Garlands ﻿Decorations, melodies, a single melody wrapping and unwrapping in time––in a single
line. A delicate tracery. Treat the octaves in this same manner and preserve the lightness, the air.

Elevation This work is elegiac, rhapsodic and for a dead friend. Elevation is used to mean rising,
lifting and also to mean building, edifice. I was thinking about Le Corbusier’s three necessities of architecture: Light, Space, Air. What does it mean to create a tonal space, a space of sounds? What is an open space? Is an open space one line tracing an open sky or a relationship between two opposing points? Can color be projected though time? Can a dying sound be given life by the mind, extended through the imagination? What remains in the end?

KontraPunkt In his commentaries on the sonatas, Donald Tovey describes the second movement of
Op 31 No.1 as “Beethoven’s most reactionary piece of music.” I used to sort of snicker about how reactionary Tovey was being by writing this, but he is correct. The piece is long, showy, operatic, indulgent, everything that Beethoven is usually not. In that sense this is my most reactionary piece. Reacting to my own inclinations to decorate things, to have multiple elements in play, to introduce changes, to set up the formal system of changes within a piece of music. This piece moves one snippet of music(from the Brahms Op118 Ballade) across the landscape of the piano.

Cortege I have from time to time been fascinated by the ideas inherent in what we have
decided to call minimalism. I don’t think that I am alone in considering any sort of method of writing music as worthy of investigation. My problem is that I simply don’t fancy most of the works I’ve encountered. They seem to lack what I call Life Power. The surface is interesting and pleasing––like watching smooth, pastel-colored screens pass slowly across a landscape––but rarely am I moved or transported by the music That changed when I discovered the music of Julius Eastman.    When I listen to his pieces, I am aware of the same sense of energy, searching, the excruciating desire to know, to feel, to understand just for a moment some mystery or one’s own desire for that mystery as I do when I view a work by Keith Haring or Timur Novikov. Life Power is what I call it, and it lives past its own life, which is why it is a miracle.
Give this piece your Life Power. 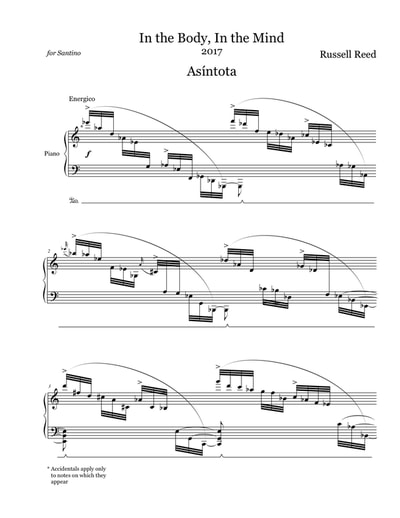 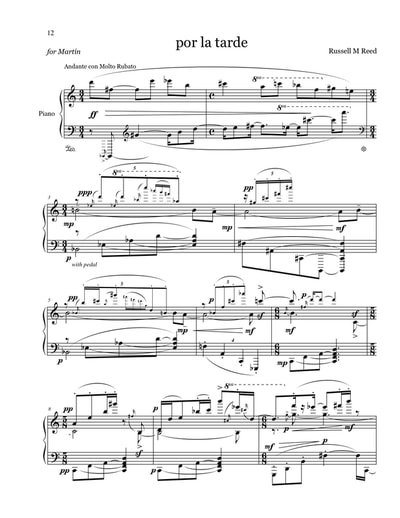 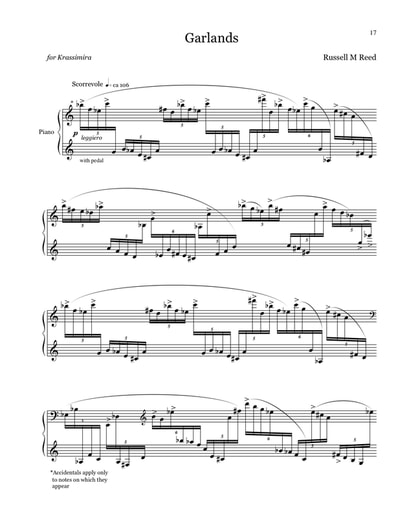 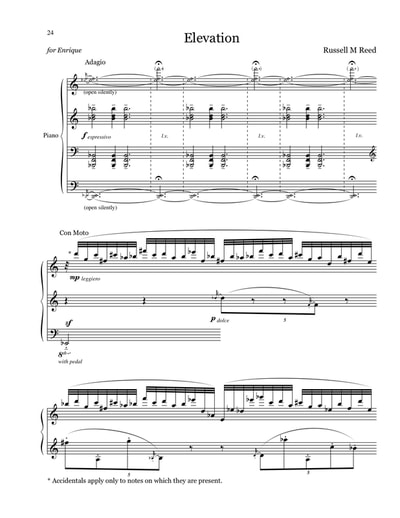 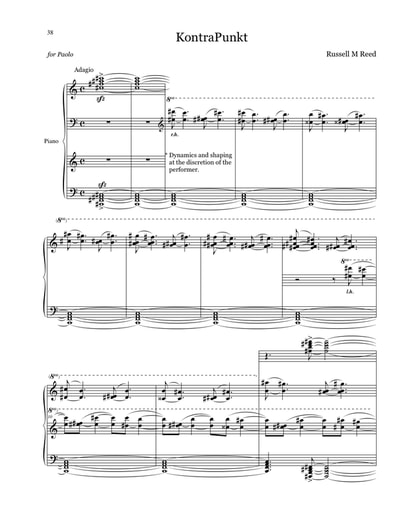 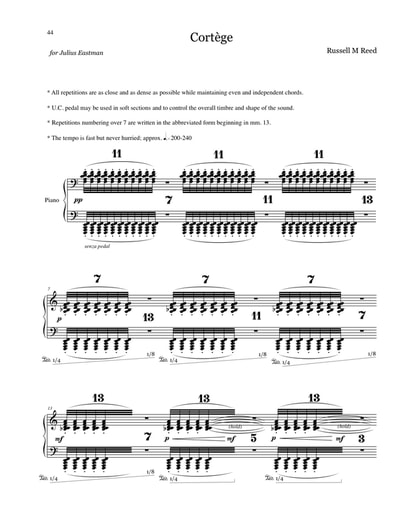